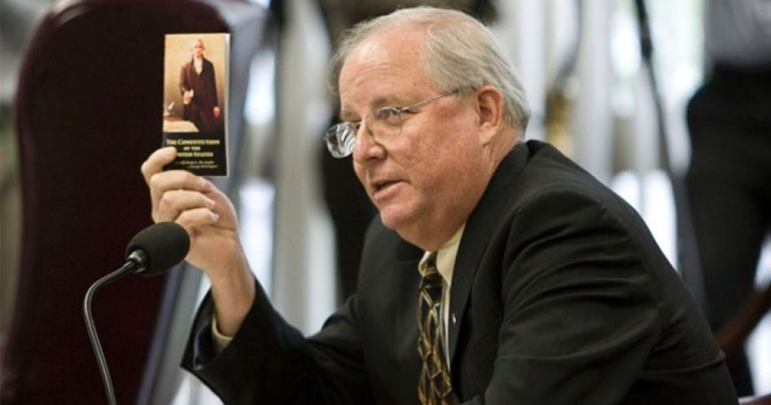 On Wednesday the State Board of Education took the historic step of voting to create an elective course in Mexican American studies for Texas public schools. One board member’s divisive stunt leading up to the vote served as yet another reminder why that action was a good thing.

David Bradley, R-Beaumont, got the board to change the name of the course from “Mexican American Studies” — which is an established field of scholarly study — to “Ethnic Studies: An Overview of Americans of Mexican Descent.”

“I find hyphenated Americanism to be divisive,” Bradley declared. Interesting statement from someone who has spent two decades on the board working to belittle and divide. And often his targets have been marginalized people.

In 2010, for example, Bradley complained to a reporter about a board member who wanted better coverage of the experiences and contributions of Latinos in new social studies curriculum standards. Bradley acidly commented that she wouldn’t be happy unless the Texas Education Agency were renamed the “Hispanic Education Agency.”

Muslims have also been a target. In 2008 Bradley distributed a campaign flyer that included a photo of his (Christian) election opponent standing in front of the famed Taj Mahal. The flyer suggested she was trying to introduce an Islamic curriculum in Texas schools. Two years later he supported a board resolution that attacking textbooks for supposedly promoting Islam and attacking Christianity. (They don’t, of course.)

Consider also his successful effort to change the the social studies standards to highlight the internment of Italian Americans and German Americans during World War II. Even reviewers for the conservative Thomas B. Fordham Institute criticized that effort, describing the change as “obscuring the incontrovertible racial dimension of the larger and more systematic Japanese American internment.”

He also wanted the standards to list President Barack Obama by his full name: “Barack Hussein Obama.” Other board members called him out. “The intent behind what you’re doing, I think, is pretty obvious,” said board member Bob Craig, R-Lubbock. Bradley replied that he would withdraw his motion to stop the “whining.”

There are other examples, but you get the point. A constant theme in Bradley’s career has been the effort to portray some people as “other,” not quite American or somehow undeserving of concern.

The truth is people like Bradley aren’t really bothered by “hyphenated Americanism.” They’re bothered by having to consider that people different from them have also been part of the American story and have made powerful contributions despite the bigotry and even violence they have had to endure.

After all, where are the complaints about “hyphenated Americanism” when folks are talking about Italian-Americans, German-Americans, Irish-Americans and other European immigrants and their descendants? St. Patrick’s Day prominently puts Irish-American culture on parade. Columbus Day is a special day for many of Italian-American heritage. We often see reminders of the cultural heritage of German-Americans, Czech-Americans and descendants of other Europeans all around us. But refer to “Mexican-American” or “African-American” and the backlash is sharp. “We’re all Americans,” critics complain. “Stop dividing us into ethnic and racial groups.”

We suppose some might argue that Bradley is racist. Is he? We certainly don’t know what’s in his heart and will thus make no such claim. But he has regularly demonstrated how insensitive and unconcerned he is about the experiences and challenges of those who are from different ethnic, racial and religious backgrounds. And he seems to get a thrill out of saying things that draw blood — that insult and demean.

There’s a common phrase for Americans who act offensively when they travel abroad. Maybe we should broaden that definition. Pretending to champion unity and understanding while acting in ways that deliberately offend and sharpen divisions makes David Bradley a particular kind of “hyphenated American” — an Ugly-American.