Texas Sen. Ted Cruz, who’s fighting it out with Donald Trump for the Republican presidential nomination, can’t understand why ESPN fired baseball analyst Curt Schilling for posting this on his Facebook page: 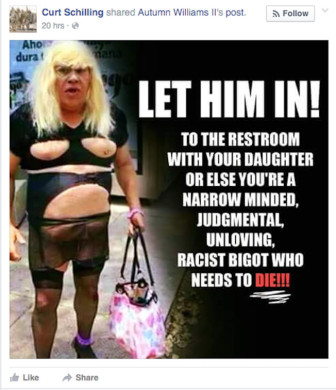 Really, Sen. Cruz? That’s what you think Schilling was really saying with his disgraceful, dehumanizing post?

And never mind, we suppose, that this was hardly the first time Schilling had embarrassed his employer. From Deadspin:

Schilling publicly and proudly proclaimed bigoted views on a regular basis. He posted repulsive things to Facebook nearly every day, frequently going from the repulsive to the despicable and continuously dehumanizing others. ESPN repeatedly and severely punished employees for far milder violations of its various policies, and yet Schilling just kept on spending his days degrading people who aren’t like him.

But Sen. Cruz is defending the guy. So what does that tell you about Ted Cruz?