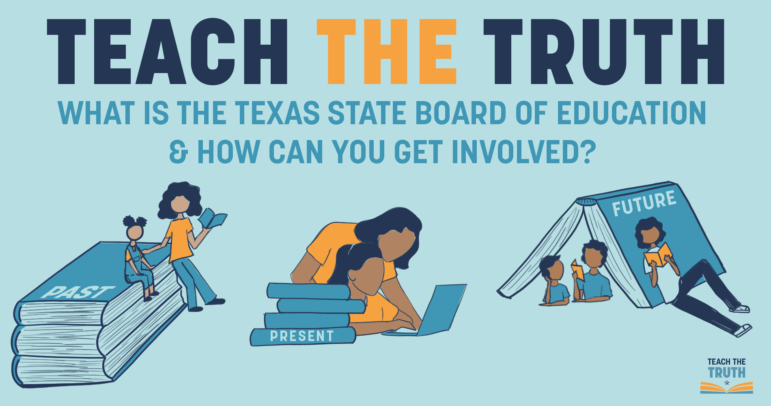 Austin, TEXAS – Advocates today denounced inflammatory attacks on teachers and called on the State Board of Education to ensure new curriculum standards allow public schools to teach the truth. The renewed action comes twelve years after the last major overhaul of social studies curriculum standards in Texas devolved into a political circus.

“The board must publicly reject these reprehensible attacks on teachers and efforts to censor and distort what students learn,” said Carisa Lopez, senior political director at the Texas Freedom Network. “Quality public education is increasingly under attack, and the state board and these standards are just the newest battleground.”

Lopez criticized an inflammatory letter sent Friday to state board members by a prominent social conservative. The letter portrays educators drafting the new standards as anti-Christian and a danger to students. It then includes a Bible verse suggesting the teachers deserve to be killed.

Teaching children the truth, both the good and the bad, is a moral imperative, states Rev. Natalie Webb, senior pastor at University Baptist Church in Austin and a mother of two young children.

“All of our children deserve an honest education that enables them to learn from the mistakes of our past and help our nation create a better future,” Rev. Webb said. “We can’t solve the challenges that still divide our nation if we’re not honest about our past and the roots of those challenges.”

Christopher Carmona, who teaches Mexican American Studies at Our Lady of the Lake University in San Antonio, urged the board also to ensure the new standards acknowledge the growing diversity in Texas classrooms.

“Students do better when they see the stories of others like themselves in their school lessons and our nation’s history,” Carmona said. “The new standards must acknowledge and teach about the cultures, histories and contributions of all who make up the American mosaic. New elective ethnic studies courses in Texas are an important step forward, but they aren’t a substitute for teaching about the experiences and contributions of diverse communities in the core courses all students take.”

Lily Trieu, interim executive director of Asian Texans for Justice, urged that now is the time to include and expand the curriculum around the history and contributions of Asian Americans.

“Far from being newcomers, Asian Americans have been present in the United States since before the Mayflower,” Lily said, “Texas students deserve to see a more inclusive and accurate account of the ways Asian Americans have made an impact throughout our country’s history.”

“As the Texas SBOE members discuss ethnic studies among the social studies standards, they must listen to the powerful voices of Texas students, educators and families advocating an inclusive curriculum that affirms every student.” said Celina Moreno, J.D., IDRA President and CEO. “Today, in response to the current climate of draconian classroom censorship, IDRA launched a powerful School Resource Hub with lesson plans and tools for teaching a truthful account of our nation’s past and present.”

Numerous education and civil liberties organizations have come together in a broad Teach the Truth campaign to support better curriculum standards as well as oppose efforts by Texas lawmakers to whitewash the past and ban books in schools and libraries.

The state board is set to hold a second public hearing and begin debating drafts of the new standards at the end of August. A vote on final adoption is expected in November.

The standards will guide the education of the state’s 5.5 million public school students. Publishers must submit new textbooks that cover the final standards.