Hmmm… Did They Think This One Through? 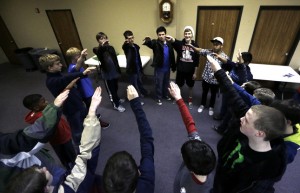 UPDATE: The chairman of the Trail Life USA board is disputing the original news article’s caption for this photo. That Associated Press caption  said the photo showed Trail Life USA members saluting while they recite their organization’s creed. Trail Life USA’s board chairman, John Stemberger, says these members were actually following a Boy Scout tradition in which scouts raise and then slowly lower their arms while singing “Taps” at the end of a meeting or event. Click here to read more about this. We’re grateful to the TFN Insider reader who pointed it out to us. The original news article now has a revised caption. We are revising our post to reflect the new information we have.

Trail Life USA is a new Christian-based alternative to the Boy Scouts. The group’s founding comes in response to last year’s decision by Texas-based Boy Scouts of America to drop its ban on gay youth. Trail Life USA’s membership standards clearly state that “any sexual activity outside the context of the covenant of marriage between one man and one woman is sinful before God and therefore inconsistent with the values and principles of the program.” In short: gay youth (or, we assume, the children of gay parents) need not apply.

Other youth will also feel unwelcome in Trail Life USA. Although the Boy Scout oath mentions God, that reference isn’t specific to a particular faith. In contrast, Trail Life USA’s website states that the organization “unapologetically reflects a Christian worldview.” Moreover, adult leaders must abide by the group’s “statement of Christian faith.” So even though membership is technically open to boys “irrespective of religion, race, national origin or socio-economic status,” do you think many Jewish boys and other non-Christians will line up to join? Of course, we doubt that really bothers the group’s founders.

Dan Quinn of @TFN shares how religion can be discussed objectively during classroom instruction, but students in public schools shouldn’t fear they will be preached to #CC20 #CreatingChange pic.twitter.com/vbmP…

Meme Styles uplifting that we are in the land of indigenous people and behind a building built by slaves #WomensMarchATX pic.twitter.com/V72E…

#CreatingChange join us at 3:15 for our “Education, Religion, and LGBTQ Youth” workshop with @AmericanAtheist @SIECUS @TFN #CC20 pic.twitter.com/1QVQ…

We'll be at the #WomensMarch #ATX tomorrow! Come by our table and say hello. Details: bit.ly/2FOS5kn pic.twitter.com/tv39…

Today is religious freedom day. From historian John Ragosta: "Creating a religious exception to neutral laws is a dangerous thing. When Thomas Jefferson and Antonin Scalia agree on a critical element of religious freedom, it would be wise to take notice." bit.ly/2QYgFG0

You are invited to join dozens of religious, secular, civil rights and other national organizations on Twitter on Thursday, January 16th -- Religious Freedom Day at #ReligiousFreedomIs bit.ly/RFD2020

"This extreme proposal is a tactic for abortion opponents to score political points and mislead Texans about their rights," said Kamyon Conner (@hnychckn), executive director of @TEAFund. #AbortionIsHealthCare texastribune.org/202…